Well, here I am sitting down in a small town McDonalds contemplating writing another blog (and apparently doing so) but not too sure where to begin. I am hoping that watching people stuff their washed out wintery faces with all kinds of nuggetry will spark something special. The strange contrast between what I am seeing and smelling with the wonderous sounds of Vicente in my ears is kind of groovy. (I think Nana over there is actually chewing in perfect rhythm to this particular Bulerias!) So, given my particular surroundings, I have a feeling this will be more of a “nug” than a “blog”…. bear with me.

Well the past year has been a bit of a blur, filled with awesomeness and a familiar kind of internal insanity that keeps things interesting and always ridiculous Even to this day I still don’t know where any of it is going, or myself for that matter. So maybe it’s best I attempt to break down the current state of affairs and see where it leads me.

(hold on a sec….. i’m currently using my powers to deter a gang of little monkeys to NOT sit beside me… no, no, no, no, no…….fuck. Enjoy your nuggets.)

So as a lot of you know, we have just started announcing more shows. Hooray. Actually I really mean that. (here, cut and paste these… “!!!!!!”) We have held off playing for awhile because we are thinking a bit more conceptually now and needed more of an overall strategy in order to make it interesting. Believe it or not, it has been a difficult thing to accomplish with so many moving parts and obviously, opinions. I’m notoriously bad with this “outside opinion” thing but luckily and thankfully I have people around me (Chris and Zeke) that are great at this whole “working with people” thing… I have a ways to go “apparently”. We basically ended up saying “fuck it”, put the IME blinders on, and went for it… and now I am once again “interested”!!

Overuse of quotations aside, we didn’t really think the concept is that difficult. 2 shows, one day: A late afternoon, intimate, “deconstructed” acoustic performance with Q and A, followed by 2.5 – 3 hours of a full tilt IME show. We know that tickets are fucking crazy expensive these days for all artists, and just want to make sure our audiences know that we are willing to work our asses off for it, and for them. (I recently had some friends pay $125 for tickets to see some supposedly iconic Canadian band and they played for exactly 65 min, no encore….. fuck…. that…..seriously… you…. old….fucks)

(wait……. why am I “hearing” this guy eat his fucking McFlurry?? What the hell is in there!! I have headphones on for christ’s sake … mierda !!)

Ok, while I can’t promise exactly 5 hours of music every night, you get the point. We just want to offer a real experience to our fans, and play what we want, for as long as we want. No restrictions, no rules. This needs a couple of things to happen in order to move ahead: a decent band, great fans, flexible venues, amazing promotion partners, and strong fucking legs. Outside of the leg thing I think we have everything in order.

Let’s go to the beginning: for us it was Oakville. We played the Oakville Center for the Performing Arts, and have to say that this experience opened our eyes to many possibilities. First off, the main reason we ended up here was a man named Ronnie Brown and I need to say thanks. He basically went way outside the box and said “I want them here”. IME in a “soft seater”….hmmmm. A gamble perhaps in a lot of smaller minds, but not his, and definitely not ours. He didn’t know what to expect, and neither did we. What ended up happening was a real beautiful thing as it was sold out, our fans were respectful to the theatre (which was a definite concern), we played as long as we wanted (3h 20m), did a kick ass Q and A after that, and all parties involved left feeling great. This is a huge deal and a sacred synergy for a band like us… this “Trinity of Satisfaction” (I think it exists in porn too…) Basically, we just want the people spending the money to be satisfied that this IME partnership is good for all, and I think we achieved this on the night. So a huge thank you to the awesome staff in Oakville and the fans for getting thing started off right! We will see you again soon!

While we didn’t include the acoustic portion at this particular show, we have always known it can work, with the right partners involved. So with the announcement of the next batch of shows, IME just wants to point out our more unique and open minded friends who have jumped into this concept along with us (and you).

April 25th – LONDON (london concert theatre)
We have been dying to get back here since the huge show in the summer. London fans are awesome and every time we are there we end up going home with a lot of things to talk about. Going back to do our thing here is huge for us and we are really pumped up. Of course this is the full monty, with an acoustic performance and Q and A for a handful of people before the bigger show. London is specially noted because FM96 were the first ones to play “We Got the Love” (and the full version too!…yes there is a solo in the fucking song!) and consistently stayed on top of this tune for what seemed like an eternity… this is unheard of these days it seems. Somebody bless these people for doing the right thing!! ( I’d say god bless or something but judging from the table next to me… he might be busy elsewhere!!) So a massive thanks to Mark Cameron, Brad Gibb, and the entire team at FM96… I think I owe you another song.

April 26th – St. CATHARINES (caw hall)
Again, a fantastic place for us to play. 97.7 HTZfm is one of those stations that has always been there for IME. Our history goes back all the way to the beginning with these guys and it’s awesome to move ahead on a concept together… just like uh… really… old….times. Again we will do the whole concept here if nobody dies the night before in London. (even then, we’ll improvise…) So a huge, full eye contact kiss on the openmouth of Paul Morris, Bruce Gilbert and the entire gang there!!

April 18th – OSHAWA (the marquee)
It feels like ages since we played here (well, since we played anywhere!) and we are really juiced up to try this out in the ‘SHWA with our friends at The Rock 94.9!! (sorry to use the term ”SHWA”…. it kind of makes me feel mildly inappropriate like using the term “taint” or “choad” in mixed company!) The Rock has been wickedly supportive of us and we are pumped to go and try this crazy thing out!! To Doug Elliot and the gang, we salute you and can’t wait to tickle the collective “SHWAS” of your fine community!

So this is it for now. We have more shows like this in May as well that we will announce shortly. What we are really trying to do is to bring this concept coast to coast, but first steps first. Be patient and just think, “those Ontario shows will suck compared to what we get out here, with all a’dem bugs having to be ironed out!!” That should make you feel somewhat better.

New songs on the go, but currently hating everything …. zzzzzzzzzz.

Fuck, I need to get out of here fast and escape all the nom nom nom …. and find me some om om om ! I’m getting a little edgy and almost all of my senses are rebelling. I’m feeling stressed and I’m pretty sure that although I didn’t eat anything, I’ll still have the cacarells …. grazie McDonalds.

hope you enjoyed my “Nug”. 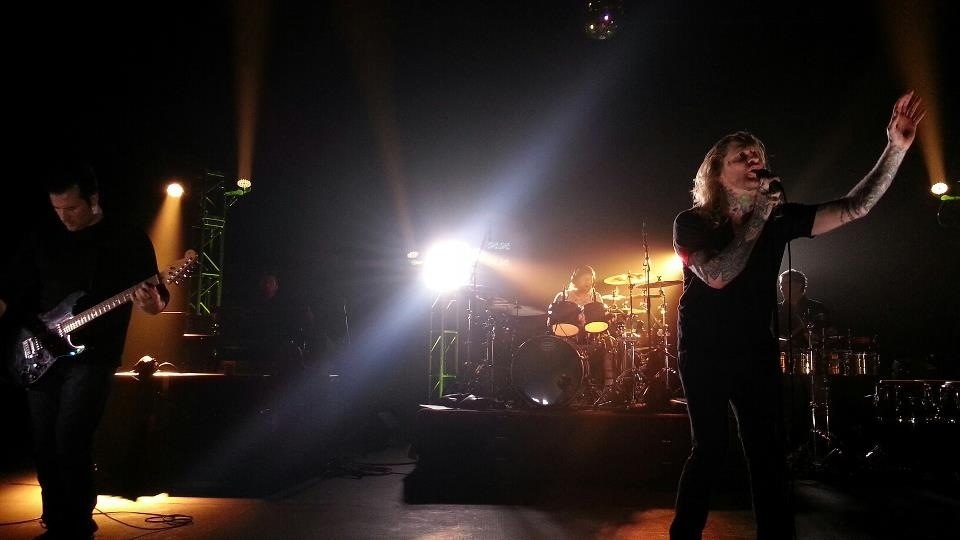